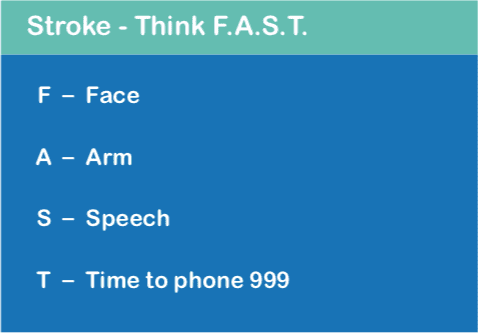 An acronym is a word or name formed as an abbreviation, created from the initial letters of a phrase or a word. The first aid world uses many acronyms to help us remember different treatments. In this series we have explained the meanings of the most common first aid acronyms to help you avoid confusion!

The first aid acronym FAST is used to identify if someone is having a Stroke. These are simple tests we can ask a casualty to carry out.  If they cant do them well think – Stroke – and call 999 immediately. The faster a stroke casualty receives medical attention the better.

F – Face.  Does the casualty have any facial weakness, can they smile properly? If you ask them to stick out their tongue – can they do this in a straight line? If not think Stroke.

A – Arms. Can the casualty lift up both their arms at once? Do they have tingling or numbness in one of their arms? Can they grip your fingers with the same strength in each hand?

S – Speech. Are they having difficulty on speaking, or forming their words correctly? Ask them to say hello and their name.

T – Time.  If you see any of these three signs it is time to call for HELP.  Don’t delay, call 999 or 112 immediately.  Also, try to inform the call handler and paramedics what time the casualty was last known to be OK – How long have they been displaying these symptoms?  This information may influence the treatment they receive.

ANY ONE of these symptoms could be a sign of someone having a stroke. They do not need to display all 3 for you to act and call for an ambulance.

Strokes are often known as ‘Brain Attacks’ as they are similar in mechanism to heart attacks and are most often caused by a blood clot.  This can reduce the blood flow and subsequent oxygen flow to the brain, causing a portion of the brain tissue to die.  This then leads to the poor functions described above.

Strokes can often be very minor and go unnoticed, but can also be life threatening.  If in doubt, seek medical attention immediately.

What to do if someone is having a stroke:

This video from the Stroke Association explains more.  There is also lots more information on their website if you are interested in learning more. https://www.stroke.org.uk/

You might also want to find out about other First Aid Acronyms in our blog series. The next one is R.I.C.E.

[button_2 align=”center” href=”https://www.firstaidtrainingcooperative.co.uk/course-descriptions/” new_window=”Y”]Find out more by coming on one of our first aid courses[/button_2]

Electric Shock – do you know what to do? Electric shock A flow of electricity between two parts of the human body can cause a…

Updated January 2021 What is Bystander CPR? Bystander CPR is when someone steps in to assist a person who’s had a sudden cardiac arrest and…