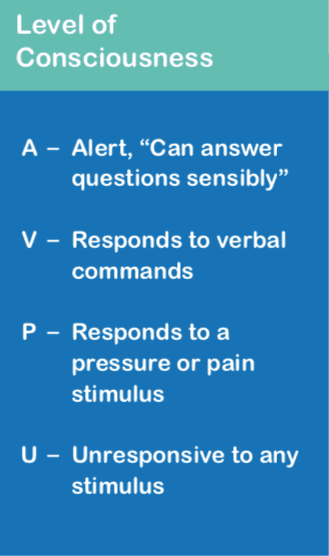 An acronym is a word or name formed as an abbreviation, created from the initial letters of a phrase or a word. The first aid world uses many acronyms to help us remember different treatments. In this series we have explained the meanings of the most common first aid acronyms to help you avoid confusion!

The first aid acronym AVPU is used by first aiders and those in pre-hospital care as it is a simpler consciousness scale to remember than the Glasgow Coma Scale (GCS). This consciousness test can be repeated over time to see if the casualty is becoming more or less conscious.

A – Alert. Can the casualty talk to you and answer real questions in real time? If not, they are not alert.  We define an Alert casualty as one who can ‘Answer questions sensibly’.

V – Vocal Command. Does the casualty respond to your voice or vocal commands. If they do, then they are at the V stage on this four-point scale.

P – Pain Response. If the casualty does not respond to voice, will will respond to pain? (We could say pressure if we want to be kind). If you tightly squeeze the casualty’s hand do they moan or groan, when you touch their leg do they flinch?

U – Unresponsive. Casualties are in a bad way. They need to be placed into the recovery position to manage their airway, and help should be summoned quickly.

This video shows how to perform a primary survey, including an assessment of the Level of Consciousness using the AVPU scale.

[button_2 align=”center” href=”https://www.firstaidtrainingcooperative.co.uk/course-descriptions/” new_window=”Y”]Find out more by coming on one of our first aid courses[/button_2]

UPDATE – Following my initial blog post on 14 July 2015, I received a lot of questions asking for more detail on the recognition of…