In this article we will examine the use of Israeli bandages, tourniquets and haemostaic /clotting bandages.

Uncontrolled/uncontrollable bleeding is the most preventable cause of deaths on both the battlefield and the streets. Studies show up to 50% of combat fatalities and 39% of civilian trauma fatalities are due to uncontrolled bleeding from an extremity. It is possible to die from femoral arterial bleeding in as little as three minutes. 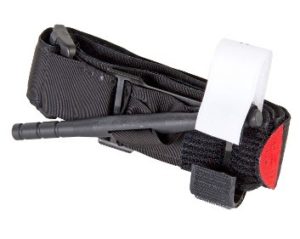 A tourniquet is a compressing device (bandage), used to control venous and arterial circulation to an extremity for a period of time. The tourniquet is usually applied when the patient is in a life-threatening state as a result of continuous bleeding.
A very primitive tourniquet can be made from a stick and a rope! The rope is made into a loop that fits over the damaged limb and the stick is inserted through the loop. Twisting the stick tightens the loop. This primitive device may stop the flow of blood but side effects may well be tissue and nerve damage. In modern medicine, pre-assembled devices have been developed.
After World War II, the US military reduced use of the tourniquet because the time between application and reaching medical attention was so long that the damage from stopped circulation was worse than that from blood loss.
Emergency tourniquets are used in emergency bleeding control to prevent severe blood loss from limb trauma. Traditionally, emergency tourniquets are generally used as a last resort, especially in civilian applications, due to the understanding that if all blood flow below the application of an emergency tourniquet is stopped, it would subsequently kill the tissue, leading to eventual loss of the limb below application.
More recently, experience in treatment of patients in civilian attacks such as the Boston Marathon bombing, and combat in Iraq and Afghanistan has changed the view. In recent years there have been significant advancements in tourniquets. These advancements have vastly improved tourniquet safety. Analysis has shown that in cases of major limb trauma, there is no apparent link between tourniquet application and morbidity of the limb.

The Combat Application Tourniquet (C-A-T) is used to provide soldiers a small, effective tourniquet in field combat situations, and is also in use by NHS ambulance services, and some UK fire and rescue services. The unit utilizes a windlass with a locking mechanism and can be self-applied. The C-A-T has been adopted by military and emergency personnel around the world. 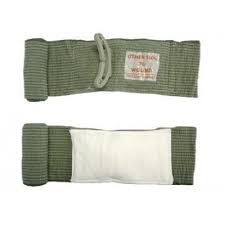 The Emergency Bandage or Israeli bandage is a first-aid device that is used to stop bleeding from traumatic injuries. First used for saving lives during a NATO peacekeeping operation in Bosnia and Herzegovina, the emergency bandages were nicknamed “Israeli bandage” by American soldiers. The bandage was invented by an Israeli military medic, Bernard Bar-Natan.

“The emergency bandage is an elasticized bandage with a non-adhesive bandage pad sewn in. The bandage has a built-in pressure bar, which allows the user to twist the bandage around the wound once, and then change the direction of the bandage, wrapping it around the limb or body part, to create pressure on the wound. The sterile non-adhering dressing that is designed to allow removing the bandage without reopening a wound.

Haemostatics are applications designed to stem blood-flow through the accelerated promotion of clotting.  As with all treatments it is important to understand their roles, applications and the differences between them.
The primary treatment for all serious bleeds is direct pressure; all haemostatics are designed to be used with direct pressure at the site of the bleed – directly onto the bleeding artery, deep within the wound if necessary.  They are not a ‘magic powder’ that can be casually applied somewhere near the wound and left to work.
Considerations

UPDATE – Following my initial blog post on 14 July 2015, I received a lot of questions asking for more detail on the recognition of…